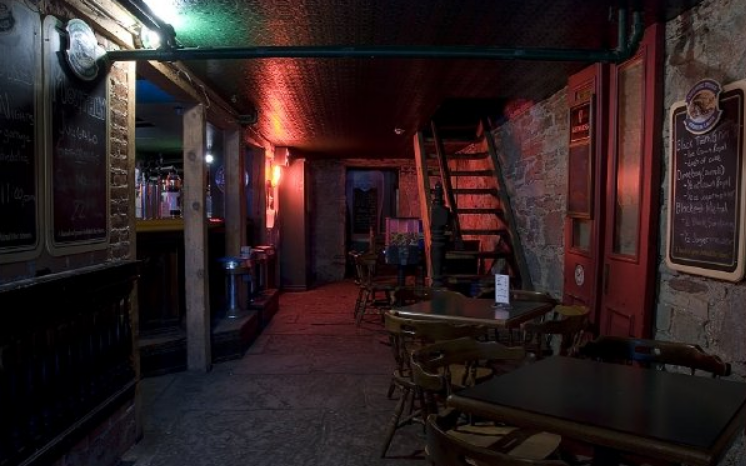 Tonr’s Top Hamilton, ON Prospects in 2021

Hamilton is a crazy city, and has some of the most talented artists on our entire route. While Hess Village is known as the best (and worst) place to turn up, just off the corner of the long strip of bars is The Doors Pub. The Doors is a Metal bar, but they’ve always welcomed us misfits to bang out tracks upstairs. Here is a list of some of our favourites Evrvdav has booked there.

Portal has been grinding to perfect his craft for years. After multiple headlines for Evrvdav shows, and a monstrous set opening for Comethazine in Waterloo (to which he brought a party bus full of his rabid fanbase), Jay has yet to slow down with over 70k monthly listeners on Spotify.

While originally from New Brunswick, and now residing in Toronto, Roderick Porter (pictured left) left his mark on Hamilton after an exhilarating headline set during the Hamilton stop on KVNE’s Cathartic Tour, as well as his performance of GLEAM at Thrash: Cambridge. With almost 900k monthly Spotify listeners and a recent headline at El Mocambo in Toronto, Roddy is on an insane trajectory.

From humble boom bap beginnings in Oakville, all the way to Hamilton, Dutch Revz secured a contract as he was blowing up. His high production music videos and viral videos where he created beats from scratch using analog and digital instruments were both great tools for his comeup. He appears to be in a holding pattern, unable to release content. I’m sure we’ll see him pop back up the moment whatever’s holding him back expires.

Leo has a large personality, a hell of a lot of talent, and cadence on his songs that sets him apart from everyone else. He is objectively creating some of the best music in the city. His performances on Evrvdav’s NYK Tour and Glorymade shows showed he knows how to control a crowd just as well as he makes his tracks. 21k monthly Spotify listeners, with a brand new single hopefully being the start of a consistent push for his brand.

ParkFromCC has been a staple in the Hamilton scene for many year. With his melodic flows and meaningful bars on his latest project EVERYTHING YOU NEED TO KNOW, he shows his true talents and versatility. Plus if you’re a Hamilton resident, I’m sure you’ve seen the stickers for his album promotion somewhere around the city.

Buunkin has been a mainstay in Hamilton with his unique style, cult-like following, and his impressive soundscape of different styles. Starting with Evrvdav shows at The Doors, Buunkin quickly began running his own shows at The Killroom, a skatepark that holds live music. Packing the park on a regular basis, ZYX Kult & Cleopatra Records are steadily growing as a prominent force in the Hamilton scene.

Touched down from Fredericton, and now in Toronto with Roderick Porter, Kill Red was a surprising but welcome addition to the scene for the time he spent in Hamilton. Roderick Porter’s aforementioned song GLEAM spotlights Kill Red’s verse to segway into his more mainstream songs, alongside his thrash and emo tracks. Almost 67k monthly Spotify listeners are enjoying his eclectic collection of songs.

Stanley has been a talented emcee and valued member of the Hamilton scene, tracked as early as 2015 at the Halloween in Hell City event in Brantford. Since, he has been featured on many Evrvdav Hamilton shows for his loyalty to music and his consistent quality.

At 14k monthly Spotify listeners, KVNE’s grind has been well warranted. From his teenage years touring in a band, to his new mainstream sound. With two Evrvdav tours under his belt, an opening spot for Virginia to Vegas, and a hardworking team, KVNE is a name you’ll be hearing a lot.

Smoothie Lou is probably the most interesting character in the scene. He is constantly putting out new stuff and new sounds while maintaining his signature charm. You will see Smoothie Lou either on stage, or in the crowd, at every function.